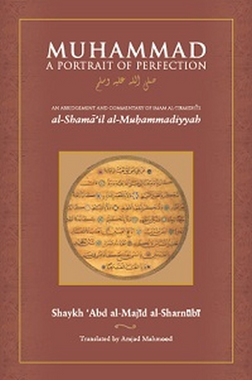 Muhammad (ﷺ)– A Portrait of Perfection

The Prophet Muhammad (Allah bless him and give him peace) is both the moral exemplar for mankind—sent by Allah as a mercy to the worlds (Qur’an 21:107)—and the ultimate possessor of physical beauty. His Companion ʿAlī ibn Abī Ṭālib (may Allah be pleased with him) said—as did many others—that ‘Never have I seen the like of him; not before or since’. Naturally, Muslims, beginning first and foremost with his contemporaries (i.e. the Companions), have meticulously conveyed the fine details of his beauty and character, including his physical form, seal of prophethood, clothing, and his manner of walking, reclining, eating, drinking, speaking and laughter, sleeping and devotion and so forth. The earliest and most famous work of this genre was the Shamā’il of the great Hadith master Imam al-Tirmidhī. This latter work was later abridged and annotated by Shaykh al-Sharnūbī, of which this is the English translation.
Shaykh ʿAbd al-Majīd al-Sharnūbī (d. 1348/1929) was an Egyptian scholar educated at the al-Azhar Mosque in Cairo. He authored numerous commentaries on Arabic grammar, sacred law, Hadith and spirituality.