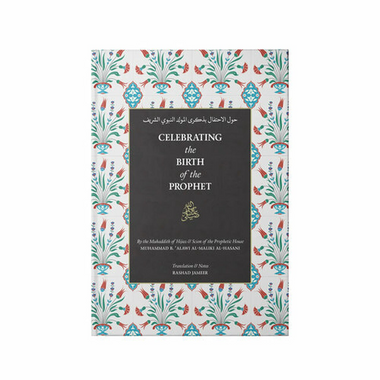 Celebrating the Birth of the Prophet ﷺ

This book, which is a work of the late Muhaddith of Makkah, Sayyid Shaykh Muhammad Alawi al-Maliki, may Allah have mercy upon him, seeks to present the case for celebrating the birth of the Best of Creations, Sayyidna Muhammad, may Allah bless him and grant him peace.

What Will I Learn ?
The Proofs of the Permissibility of Celebrating the Birth of the Prophet (PBUH)
Learn what Shaykh Muhammad Alawi al-Maliki says about the five categories of innovation.
Learn what some of Islam's scholarly giants have said about the Mawlid throughout history.

New Additions in the Second Edition:
Being with Allah and His Messenger ﷺ
When the Month of Rabi al-Awwal Arrives
Dealing With Those Who Disagree With the Mawlid

About The Author
Al-Sayyid Muhammad bin `Alawi bin Abbas al-Maliki al-Hasani was one of the foremost traditional Islamic scholars of contemporary times, and without doubt, the most highly respected and loved scholar of the holy city of Makkah and the entire Hijaz region (Western Arabia).
He is a grandson of the Prophet ﷺ, a leader of the Ahl al-Bayt, the Imam of Hadith in our age, an authority of the four Madhhabs, a spiritual leader of the highest caliber, a caller to Allah par excellence, and unparalleled in his standing in the world of traditional Islamic scholarship. Visiting him was considered imperative for the ʿUlama who would make the journey to Makkah.